What kind of birds are yellow and black? Photos of 15 kinds

In the United States and Canada there are many birds colored primarily yellow and black. This is a common color pattern of several species of finches, tanagers, orioles, meadowlarks and warblers.

There are even far more kinds of birds that are colored greenish above, yellow below, with black feathers in the plumage. I don't cover those here. The birds in this article are primarily bright yellow on the body with either black wings and tail or black on the head. But I include a few other birds with slightly different color patterns, in case these other birds might be the one you saw.

The birds most likely to be noted in your backyard or feeder, or in the countryside nearby, are these yellow and black birds, which I'll describe further (with photos) below:
When you first notice a bird it may be color that grabs your attention. However, many birds are color-patterned similarly. Males and females may be different colors. Breeding and non-breeding plumages are likely to be different. Thus the size and shape of the bird, and especially the shape of the bill, is more helpful than color for quickly narrowing down the possibilities among the world's 10,000 species of birds (or even North America's 1,000 species).

If you aren't a birder, though, chances are you are asking about a very common bird in your backyard or feeder. That narrows down the possibilities greatly. I'll start with those, then continue on to obvious birds you may see in the countryside or woods.


Yellow and black feathered birds at your backyard seed feeders


There are three common birds that may visit your seed feeders. If the bird you are inquiring about was in your backyard, there's a good chance it was one of these three.

Frequently, when people ask about a bird that is bright yellow and black, or a bird that is yellow with black wings, it is the American Goldfinch. It is not the only bird so colored, as you'll see below, but this species is common and widespread across the United States. It also is common at seed feeders, especially thistle feeders.

American Goldfinches are little yellow birds with black and white wings and tail, and a white rump and under tail. Males are much brighter yellow than females, and sport a black crown. Length bill tip to tail tip: 5 inches.

In winter this species molts into a dull creamy brown body plumage with buffy wing bars that barely resemble the summer magnificence. Flight is strongly undulating in the flap-bound style.

Often found in large flocks except in breeding season.

Voice: Song light and clear. In flight a 4-note lilt that can sound like po-ta-to-chip!

Lesser Goldfinches have green or even black backs. The yellow underparts, including the under tail coverts remain bright yellow, even in winter. Length bill tip to tail tip: 4-1/2 inches.

In flight the wings show a long white stripe mid-wing. Flight is strongly undulating in the flap-bound style.

Evening Grosbeaks nest across southern Canada and in the mountains of the western United States. In winter they descend to the lowlands and southward. But each winter is different. In some years, when seeds are scarce in the north, huge flocks irrupt far southward. At these times they feed on maple and elm seeds, as well as in backyard seed feeders.

Plump with short tails and an over-sized greenish-yellow bill. Males have yellow belly, shoulders and forehead that merge into a smoky gray head and upper body. The tail is black. The black wings have large white secondary feather patches that are obvious in flight. Females are pale gray but show a hint of yellow in a similar pattern, thought with additional white wing patches at the base of the primaries. Length bill tip to tail tip: 8 inches.

Voice: Often heard in flight is a clee-ip call and a whistled pew, either clear or buzzy.


Yellow and black birds in your backyard shade or fruit trees


If one of the above 3 species weren't the bird you saw, then we have more work to do! There are several female tanagers and orioles that have yellow and black feathers and may appear in your shade or fruit trees during spring migration and summer. Most of these birds follow the general pattern of being yellow with black wings.

If you live in the West you may wake one morning in May to your trees dripping with colorful tanagers that arrived overnight! Otherwise these birds tend to spend their time in pairs hidden high in tallest conifer trees.

Voice: Males sing a hoarse robin like song. The calls include a rough pi-ter-rik.

Scarlet Tanagers are the Eastern counterpart of the Western Tanager.

Breeding males are bright red with black wings and tail. But the female is dull yellowish, or greenish, with blackish or olive wings. In fall the male becomes blotchy green and red and then molts into a yellowish plumage similar to the females coloration. The bill is pale. Length bill tip to tail tip: 7 inches.

Males are dark--deep chestnut and black. They have a black hood, back, wings and tail. This contrasts with the chestnut underparts. Females are olive on the wings and upper parts, yellowish below. The immature male is yellowish below with an extensive black chin and throat (see photo above). Length bill tip to tail tip: 7-1/4 inches.

Voice: Song is a rapid burst of whistled notes downslurred at the end reminiscent of House Finch. Call a soft chuck. 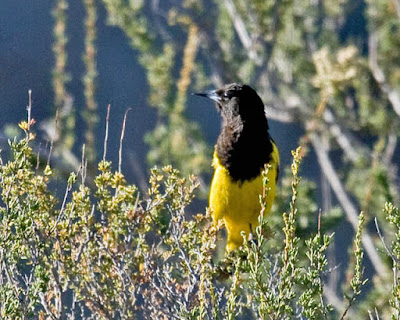 Scott's Oriole is a bird of desert mountains and yucca in the southwest deserts.

The male is black above, including head, breast, back, wings and tail. It has white wing patches. Females and first spring males have a variable amount of black on the face and upper breast, but are more olive above, rather than black. Length bill tip to tail tip: 9 inches.

Voice: The song is flute-like whistles similar to the song of Western Meadowlark. Harsh chuck call.

Similar species not shown: In southern Texas is Audubon's Oriole. It is similar to Scott's Oriole but the back is yellow.

A bird of palm trees from California to Texas.

Hooded Orioles in California are a bit more yellowish than the orange birds of Texas. The males have black throat, back, wings and tail. Females are yellow below and greenish above with dark wings. First year males are similar to females but with more yellowish under parts with black throat. Length bill tip to tail tip: 8 inches.


Meadowlarks are birds of short grasslands and deserts. From above they are camouflaged black, brown and white. From the front, though, they have brilliant yellow under parts with a black band across the chest.

This open country songster of fields and meadows is found in the eastern United States and southwest.

Eastern Meadowlarks are speckled and streaked above in browns and blacks, darker than Western Meadowlarks. The underparts are bright yellow. A black band goes across the chest. The yellow throat is narrower than on Western Meadowlark. The malar feathers down from the lower mandible of the beak are white. Length bill tip to tail tip: 9-1/2 inches.


This grassland species is found westward from the Midwest and Texas.

Western Meadowlarks are speckled and streaked above in browns, blacks, and grays, paler than Eastern Meadowlarks. The underparts are bright yellow. A black band goes across the chest. The yellow throat is wider than on Eastern Meadowlark. The malar feathers down from the lower mandible of the beak are yellow. Length bill tip to tail tip: 9-1/2 inches.

Voice: The variable song consists to many flute-like notes. Gives a chuck call and rattle.


Yellow and black birds of woodlands


There are many warblers with yellow and black feathers. Most also include white and green plumage. I present 3 here that are primarily yellow and black. These insect gleaners are primarily found in summer, migrating south of the border in winter. An exception is the Townsend's Warbler below.

Wilson's Warblers nest across Canada, Alaska, and south in western mountains. But they may be found in migration across the United States, but tend to be more common in the West in stream tangles.

This is a small bright yellow bird with beady black eye. Only the male has the small black cap. Length bill tip to tail tip: 5 inches.


This warbler is found in the eastern United States, especially the Southeast, in wooded swamps.

Bright yellow below with a black cowl over the head, encircling the yellow face. Upper parts and tail green. White tail spots show when tail fanned, or from below. Female has greenish hint of male's cowl over face, but not throat. Length bill tip to tail tip: 5-1/4 inches.

Townsend's Warblers are breeding birds of conifers in western mountains from Alaska to Oregon. They winter along the West Coast.


Yellow and black birds of marshlands


I present two common species here that do have black and yellow feathers, but are patterned differently from the birds above.

Breeds across Canada and the United States. Winters along the southern US coasts and southward.

This marsh-dweller often appears more olive brown with bright yellow throat and under tail. The black domino mask across the face is an obvious mark on the male that is lacking on the female. Length bill tip to tail tip: 5 inches.


This noisy blackbird is found in marshes from central Canada, the Great Plains and the Great Basin of the United States.

The male Yellow-headed Blackbird is black with a yellow head and chest. The female is darker on the face and neck with a blob of yellow on the chest. Both genders have white wing patches visible in flight. Length bill tip to tail tip: 9-1/2 inches.

Voice: The song is a hoarse rasping produced with much contortions. Call is a low kack.

Email ThisBlogThis!Share to TwitterShare to FacebookShare to Pinterest
Labels: identification

I'd love to hear from you. What did you think? Is something missing? What else would you like to see in a future article? Comments are moderated to eliminate spam; thanks for understanding that I may not be able to get back to you right away. --Greg--

As an Amazon Associate I earn commissions from qualifying purchases. Thank you for your support.

[Updated January 11, 2020]  You want to purchase binoculars for bird watching but you don't know who to trust! This post was written...

As an Amazon Associate I earn commissions from qualifying purchases.